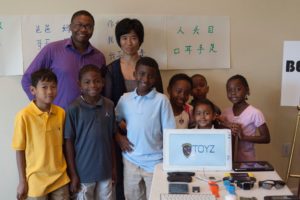 A Ward 8 in Washington, DC native, he was featured on CNBC as a Thiel Fellowship 20 Under 20 finalist and a High School graduate at 15. He graduated from Carnegie Mellon University with an Electrical and Computer Engineering degree and 2 business minors at 20. While there, he founded a student organization, became an Intel #HackHarassment Ambassador, and started Toyz Electronics on the Carnegie Mellon campus as an official startup in the Swartz Center for Entrepreneurship.  He Is Also A Former EA Sports Employee And Current Software Engineer.

Damola Idowu is an innovator, author, journalist, songwriter, musician, engineer, entrepreneur, publisher, executive, educator, technologist, and performing artist, with 25 plus years of activity in the hip-hop community. He has commercialized and distributed millions of copies of multi-media products he created. These products will reach over 20,000 points of sale across 6 continents in over 30 countries. In the process, he was at several critical junctures in hip-hop history. He pioneered the intersection of Hip-Hop and comic books with Da Great Deity Dah. He pioneered the intersection of Hip-Hop and Business with the launch of Owners Illustrated Magazine. In that process, he created and trademarked the term Hustlenomics®. He also pioneered the coverage on the intersection of Hip-Hop and Technology. In 2004 he began introducing technology executives across several industries to hip-hop audiences in Owners Illustrated and later Toyz Nation Magazines. This led to facilitating the diversification of underserved communities into computer-related STEAM Jobs. Damola has a background in mechanical engineering from Syracuse and Howard Universities. He enrolled in college at age 16 and has won an engineering design competition at Howard University at 17.

Drew Davidson is a professor, producer and player of interactive media. His background spansacademic, industry and professional worlds and he is interested in stories across texts, comics, games and other media. He is the Director of the Entertainment Technology Center at Carnegie Mellon University and the Founding Editor of ETC Press and its Well Played series and journal. Drew helped create the Sandbox Symposium, an ACM SIGGRAPH conference on video games and served on the IGDA Education SIG. He serves on many advisory, editorial and review boards as well as judge and jury panels. He is the lead on several grants with Macarthur and Gates, and has written and edited books, journals, articles and essays on narratives across media, serious games, analyzing gameplay, and cross-media communication.

Additional members of the team include: